Monday 4th January 2016 was spent installing the Centenary Stitches exhibition at The National Archives in London.

Here are some pictures of the team setting it up: 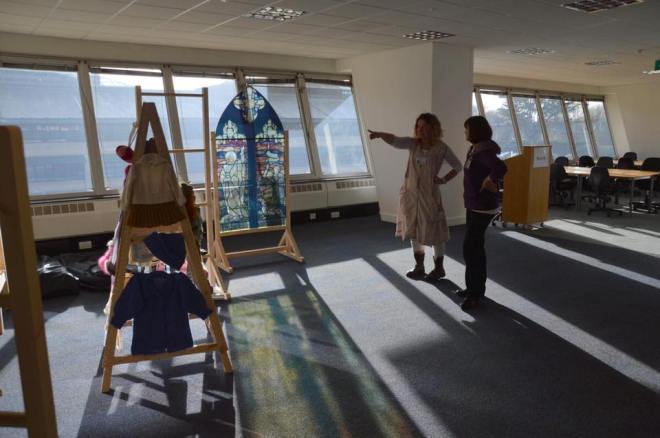 Here is a sneak preview of the exhibition – we even recreated part of the set we filmed in for ‘William’s Story, the follow-up drama-documentary!

The exhibition is open from now until March 19th.

‘Tell Them of Us’, WWI Film

Even before the script was written for ‘Tell them of Us’, I spent a year researching and gathering vintage resources to begin creating the costume. The film was to be set in the Lincolnshire village of Thimbleby during WW1. As I worked I became aware of just how much clothing was hand knitted during the period and realised that to only include sewn clothing would have been a distortion. Knitting clothing is more easily within the reach of lower income families than sewing clothing and we were telling the story of a small Lincolnshire village including many classes of people. Fabric had to be purchased by the yard, usually requiring three of four yards at a time. Wool can be bought by the ball, or spun from fleece, and the cost can be spread. Knitting doesn’t require expensive machinery either, just a few pairs of needles. It can also be done almost anywhere, and at any time. An experienced knitter doesn’t need much light either (most of the time).

During the war, knitting became a vital part of the home-front war effort, with millions of pairs of socks being knitted by women and children and sent to the front line via the Red Cross. Balaclavas, hats, mufflers, mitts, gloves, chest warmers, cholera belts (a knitted band to comfort the abdomen) and even bandages were knitted and sent to the front as well.

Knitted clothing also shows the changing fashions of the time, something I was keen to reflect, with a distinct move from shawls to cardigans, waistcoats and jumpers. Driven by the need to become active members of society, women had begun to abandon the wearing of corsets. This trend was accelerated by a scarcity of corsetry due to shortage of metal for their spiral wires and steel busks. However, corsets kept the body core insulated and warm, needing only a shawl to cover the shoulders to keep the chill off. Once corsets are no longer worn, cardigans, waistcoats and jumpers become vital for warmth. They are also liberating; shawls restrict the movement of the arms as they are needed to keep the shawl in place, sweaters now permit the playing of sports as well as active involvement in the workplace and factory.

So many times people have said of the wonderful clothes created for ‘Tell Them of Us’, ‘I would wear that’. Women’s clothing in this period becomes recognisably modern. It is part of the story I wanted to tell, so a huge thank you to the amazing team of knitters, Centenary Stitches, who helped create such a believable and accurate wardrobe for the film. A book has now been produced based on a modernisation of the vintage knitting and crochet patterns which is now available from Northern Lace Press. The film ‘Tell Them of Us’ is now available on DVD from WAG Screen Shop.

It might seem unlikely that a piece of domestic knitting could be an iconic item from the First World War, but I feel this is one.

Knitted for the comfort and protection its owner, this glove is also designed to help them kill. 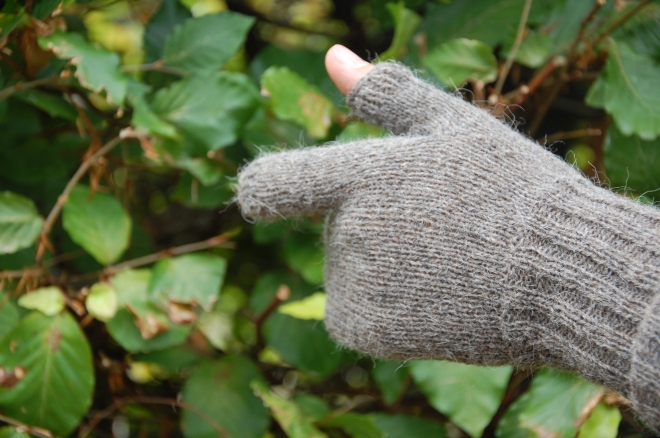 The background to the creation of the glove is in the groundswell of homegrown support that developed during the First World War from women who supplemented the basic military uniform by knitting for the men on the front line.

Gloves, scarves, Balaclavas, sleeping helmets, wrist warmers and a great variety of other shapes and purposes were produced, parcelled and posted. These knitted items were either sent direct to soldiers by their by families or supplied through major organisations such as the Red Cross, Queen Mary’s Needlework Guild or the Regimental Comforts Fund.

These knitted items gradually became known as ‘comforts’. Perhaps it was as much the love with which they were knitted as the warmth they offered which comforted the men, even when they never knew who knitted them. It was like touching home. The knits also conveyed a somewhat homely look on the battalions. Indeed, Parliament was vaguely disturbed by what appeared to be a slightly subversive movement amongst the women and a criticism of the government’s ability to provide all that the soldiers needed.  It is much more likely, however, that women were simply doing all that they could to help their men survive what were at times utterly appalling conditions.

This comment from the diary of a VAD Nurse gives some idea of how important these ‘comforts’ could be:

“What a godsend to us is the tiny, tightly packed room known as the Red Cross Stores! To convey what its comforts have meant to the maimed, bruised men they have clothed, to realise what it means to have such a supply to draw from, no human words are in any way adequate.

“We nurses know how much the gifts and comforts are appreciated, and we would emphatically assure all the women who have associated themselves with the distaff part of war work that every garment or article made, earned from some painracked man his grateful, heartfelt, though inarticulate, thanks. Every stitch they have made meant a few minutes’ greater comfort – and correspondingly less pain – from an aching body tortured on our behalf, for our defence and our birthrights. It is in no way a far-fetched statement to say that some garments – such as pneumonia jackets and cholera belts – have prolonged a man’s life.

“Many needlewomen have deplored and belittled their share in the war’s work; they have deprecated their efforts because these have not necessitated the donning of a uniform and the complete upheaval of their former life. If they would imagine what the comfort and warmth of their nice, smooth, home-knitted socks are to cold, chilblained feet, if they could see the men snuggling head and frost-nipped ears into their cosy Balaclavas, if they could witness – as we nurses have done – how a small jaconet-covered pillow, placed under the scapula of a man with his arm in an extension, has secured for the poor man a good night’s rest, there would be no more deprecating talk, no more half-sighing comments that ‘I don’t seem to be doing much. I’m only a Sister Susie.’ Be proud you are a ‘Sister Susie.’ You are doing some of the most valuable war service. The comfort supplying department is as necessary to the Army Medical Service as the Commissariat or the Clothing Department is to the army in the field. The fighting forces are infinitely glad of the existence of Sister Susies and their nimble fingers.” (Olive Dent)

The Rifleman’s gloves were knitted by Katy-Jayne Lintott.